By now no one on this planet with a radio or TV, or who knows how to read does not know what happened in Iraq on the evening of Dec. 15, 2003. Chances are, however, that you never got the entire story, so here it is, with my Christmas compliments. 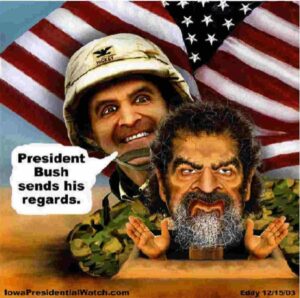 In the weeks before Saddam’s capture, Col. James Hickey, who commands the 1st Brigade, 4th Infantry Division, had sent his men out on at least a dozen intelligence-based missions to capture the illusive ex-dictator. Every raid had come up empty-handed so far as Saddam was concerned, although several produced evidence that they may have missed Saddam by only a few minutes, and nearly all resulted in the capture of other important fugitives.

Lt. Col. Steven Russell, who commands the 4th’s 1/22 Infantry Battalion, told Time magazine on the day following the capture, “In the last three to four weeks, our forces have been able to capture people we’ve been hunting all summer…. This was the inner circle, and we were taking pieces out of it.” He said further that, “Four days ago, an individual was captured that led to the capture of the man we believed was Saddam’s right-hand man. He was captured two days ago. Information he had led to information that led to the capture of Saddam Hussein.”

The man of whom Russell was speaking was a wealthy, heavyset man from Tikrit, Saddam’s home town. The captive knew Saddam well, but since he was not from Saddam’s tribe, he was not part of the ruling inner circle. Apparently, like many others in similar positions within the Ba’athist regime, he had not come forward of his own free will because he feared the consequences should his name become known.

Under questioning pressure, however, he said he knew exactly where Saddam was hiding, and volunteered to lead Hickey’s troops to the location. Because of this special information, Hickey decided to augment 600 of his soldiers with Task Force 121, the elite special operations unit set up specifically to locate Saddam and other high-ranking members of the defunct regime.

According to Hickey: “There was zero illumination that night. Moonrise would not happen for some hours. It was fortuitous.”

Hickey launched “Operation Red Dawn” at 8 p.m. on Saturday night. The soldiers spread out across two farmhouse locations in an orange grove on the banks of the Tigris River just outside al-Dawr – labeled Wolverine One and Wolverine Two. According to Cmd. Sgt. Maj. Lawrence K. Wilson, as reported by The Pilot, his hometown newspaper in Aberdeen, N.C., it was cold, and the soldiers were dressed in their “winter polypros and gatornecks.” As the actual raids commenced, by a fortuitous coincidence, the al-Dawr power plant went off line, plunging both sites into total blackness.

The first house turned up nothing. The second house was owned by Qais al-Nameq, who was a personal attendant of Saddam (and may have been the person characterized by Hickey as having “a large waistline”). It was a single-story concrete block building with a small courtyard encircled by a fence constructed of tree branches and palm fronds. A flock of chickens and a lone cow were penned in the courtyard, where strings of curing dates and sausages ran between orange trees heavy with ripe fruit. An orange-and-white taxi was parked nearby that matched the description given earlier by the informant.

Regular soldiers commanded by Capt. Desmond Bailey sealed off the perimeter. Hickey’s Operations Officer, Maj. Brian Reed, accompanied the members of Task Force 121 into the compound. Immediately, they caught one man apparently trying to escape, and when they entered the two-room hut, they captured a second man trying to leave through the kitchen window.

It turned out that these men were al-Nameq’s sons, and according to Wilson, it was almost as if they were trying to lead the invading Special Forces away from the compound. A cardboard box depicting the Last Supper and the Madonna and Child was pinned to the outside wall of the hut with the English inscription, “God bless our home.” Inside the bedroom was a 2003 Arabic calendar with a colorful depiction of Noah’s Ark, two beds, books, clothes, an unopened plastic package of new underwear, and several new pairs of shoes in their boxes scattered around the floor.

The kitchen held a refrigerator containing a can of lemonade, a packet of hot dogs, an opened box of Belgian chocolates, and a tube of ointment. They found some Mars bars and several cans of Spam beneath the sink. The hut was filled with the sickly-sweet smell of rotting oranges in several boxes along one wall.

All the while the heavyset informant stood by under guard, nodding as the troops cordoned off the area and commenced a detailed search. Nearby was a small, walled compound with a mud hut and a metal lean-to. Without actually saying anything, the informant indicated that they should search there, and when they found nothing, and apparently were preparing to return to the house, he gestured with his head towards a pile of brick and dirt.

One of the soldiers noticed an incongruous fiber protruding from the pile. He pulled at the fiber, exposing an old rug. He and his companions removed some of the dirt and bricks, and then pulled out the rug, and discovered a large piece of dirty Styrofoam with two cloth handles blocking the entrance to a tunnel.

One of the troopers was preparing to drop a grenade into the hole, following standard procedure, when a pair of hands appeared, one holding a pistol in a non-threatening position. The surprised soldiers grabbed the man’s arms and pulled him into the open.

Looking like a homeless street person, dirty, unkempt, fully bearded, the man kept his hands in the air and said in broken English: “My name is Saddam Hussein. I am the president of Iraq and I want to negotiate.”

Maj. Reed stepped forward ready to apply nylon wrist restraints and said: “President Bush sends his regards,” and secured the prisoner. Minutes later, according to standard procedure, they fitted him in a loose hood, and he became just one more prisoner.

And so ended one of the greatest, and certainly most expensive, manhunts in history.

The word spread rapidly to the encircling troops. Capt. Bailey’s gunner said: “Is that it? No shooting?” Bailey later said, “He’s the best gunner in the troop, so he was a bit disappointed.” And he added, “There it was. It wasn’t the blaze of glory we expected.”

Maj. Steve Pitt, who ran the outer defense perimeter, had patrolled past the ramshackle compound before, once even with an embedded Fox News reporter Greg Palkot tagging along. He said, “It was surprising. We did not expect to find him [Saddam] where we found him.” He added, “The initial thought from the soldiers was, ‘OK, we got his cook.’”

The next day, four members of Iraq ’s Governing Council questioned Hussein at Baghdad International Airport. After some shouting, they asked why he had killed a renowned Shiite cleric and other individuals. Hussein responded with heavy sarcasm and personal disdain. He made a play on words in Arabic with the name of one victim, and then said in effect: You don’t know what you are talking about. That was no cleric. That was a terrorist. The hundreds of thousands found in mass graves were thieves. I am a firm but just ruler. You are scum.

“Why didn’t you fight?” one of the Council members asked him as their meeting broke up. Hussein gestured toward the U.S. soldiers guarding him and asked: “Would you fight them?”

“Ladies and gentlemen, we got him,” is how Ambassador L. Paul Bremer commenced his the news conference the following morning. “ Iraq ’s future, your future, has never been more full of hope. The tyrant is a prisoner.”

Dancing filled the streets of Baghdad. Happy people fired guns into the sky, threw candy, lit firecrackers, and waved flags, including the Iraqi flag, the Stars and Stripes, and ominously, the blood-red hammer and sickle of the old International Communist Party.

In white turban and long robes, Syed Hassan al Naji, the Baghdad commander of the Army of Mehdi, gadfly cleric Moqtada Sadr’s militia, said publicly in Sadr City, “We will be friends with the Americans because of this….This is a great day.”

Major, may you never pay for another beer!

This site uses Akismet to reduce spam. Learn how your comment data is processed.

Check out all my BooksTwo submarine & four shipboard toursVisit my blog: The Thrawn RickleLearn about the Great Ozone Hole HoaxInterviews